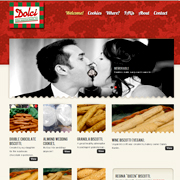 I was the baker’s client before she became mine. I bought packages of cookies then had the idea to serve them at a sculpture opening. We talked occasionally and after she experienced one failed attempt at a web project, Sandy Hunter hired debwork.com to create her web presence.

This is a WordPress site. Instead of blogging articles, Sandy keeps current a gallery of custom bakery items that are totally fun to look through. I also administer the associated Facebook page and Twitter stream.

Responsive? Yes. Striking Multiflex Theme
Client since: September 2011
Redesigned: 2014
Chow theme was pretty but not responsive to devices sizes. The theme authors abandoned maintenance and it fell behind with WordPress. This site was moved to a new responsive theme in 2014 – but we decided kept most of the great look we developed.

I thank U for your wonderful, creative work!  :O)

My website has increased my demographics bringing outside WI orders. I filled my first large internet order from out of state! They requested a wedding reception’s “Italian sweets table.”  Bride/groom graduated from UW where they fell in love with WI. They married at a park in Cottage Grove and had reception at Inn on the Park. Mother of the bride was anxious because Milwaukee was the closest Italian bakery to Madison….until she found my website! Ordered 100 mini cream puffs, 100 mini eclairs, 100 mini napoleons/neapolitans, 200 mini cannoli, 9# of Italian butter cookies!

I am sooooooo grateful to U!

Deb,
The site is spectacular! I love how it flows when surfing thru my site, especially the custom baking gallery — sooooooo cool! u done good girl… made the look very similar to old Chow theme but, with “bonuses galore”!

Kudos to you Mz Webmaster! My last two orders – the mom of UW student and the son of the 60th anniversary couple – both highly praised and LOVED Dolci’s website❣ U rock! ✌